Sergeant John Bradley is a special forces operator and one of the main characters of the Conflict series. His primary duty is the team's leader, rifleman and radioman.

John Bradley was born on may 15th, 1967 in Rockford, Illinois, United States. As a young man he served in the 101st Airborne Division and later enlisted with the US Army Rangers, likely sometime in the late 1980s. In 1990, sometime before the first Persian Gulf War, he either joined or was reassigned to the 1st Special Forces Operational Detachment-Delta (1st SFOD-D), more commonly known as 'Delta force'.

Bradley remained a United States special forces operator for more than a decade afterwards. Years later when he was thirty-nine, the old team was reformed into the newly formed ''Red team", an elite counterterrorist squad. Joined by Carrie Sherman, the team fought many missions in order to defeat the terrorist organization March 33, whom were trying to start a nuclear war between India and Pakistan.

Bradley has a fit/athletic build. In Conflict: Desert Storm, Bradley's appearance was somewhat 'casual' for a special forces operator. When he was deployed to the middle east, he wore a desert United states army patrol cap, along with the then issued desert battle dress uniform (D.B.D.U.), as well as a standard bag for an M40 field protective mask worn on his left thigh.

Along with his signature weapon and storage bag, he also wore a british-made AN/PRC-319 radio pack for long range communications, or for calling in air strikes. He also wore a set of British tan coloured desert boots which he likely purchased privately for the mission. 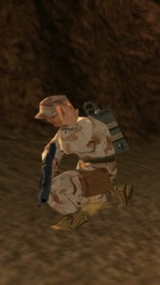 In Conflict: Desert Storm II, Bradley's appearance changed from 'casual' to that of an elite Delta operator. His gear consisted of a black pro-tec S.E.A.L. style helmet, black tactical vest, knee pads and black boots. Aside from these minor changes, Bradley's appearance remains mostly the same. 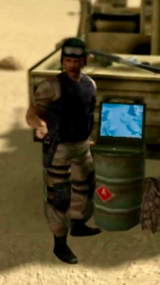 In Conflict: Global Terror, Bradley's appearance changes to a more stealth-like clandestine look. He still, however, sports his trademark radio pack on his back along with a black colored patrol cap, retaining his familiar look.

Bradley is a serious commander that always places the mission and his men above all else. He does not break under pressure and inspires those around him. He is a great tactician and can find a way out of most situations. He is easily annoyed by Jones' and Connors' usual bickering during operations, and will often snap at them to stay focused. He also has a sharp tongue, insulting iraqi interrogators and snapping at Foley when he asks about his battered appearance.

Bradley is primarily a rifleman, but has slight experience with sniper rifles and explosives.

In Conflict: Desert Storm, if the original operator is killed in action he can be replaced by another operator.

Note: These are ''rookie'' operators and possesses skills far inferior to Bradley.

Community content is available under CC-BY-SA unless otherwise noted.
Advertisement