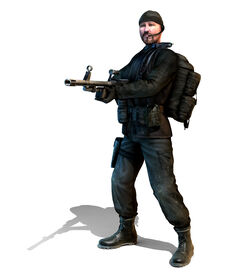 Corporal Michael ''Mick'' Connors is one of the main characters of the Conflict series. His primary duty is the team's heavy weapons specialist.

He went on several joint missions with John Bradley and the German special forces. 15 years later, when he was 35 years-old, the old team was reformed into 'Red team', an elite counterterrorism squad.

Connors is a fun guy who often lightens the mood during operations. He has an aggressive attitude, which probably comes from his status as a heavy weapons specialist. He has a slight rivalry with David Jones.

Connors utilizes machine guns like the M60, M249 SAW, Vektor SS-77, FN MAG and XM8 he is also an antivehicle expert, taking out any enemy tanks and other hostile vehicles threatening his team, using rocket launchers like the M72 LAW, LAW 80 and MBT LAW. He is also skilled with using pistols like the Desert Eagle as his sidearm of choice, he briefly used the P228 the same one that Bradley commonly uses through out the missions.

In Conflict: Desert Storm, if the original operator is killed in action, he can be replaced by another operator.

Note: These are ''rookie'' operators and possesses skills far inferior to Connors.

Retrieved from "https://conflictserieswiki.fandom.com/wiki/Mick_Connors?oldid=6108"
Community content is available under CC-BY-SA unless otherwise noted.